I recently traveled north from Manhattan on the B train to visit Art AIDS America, an exhibition a decade in the making now on view at The Bronx Museum of the Arts in New York City through October 23 after previous stops at venues in Tacoma, Washington, and Kennesaw, Georgia.

It has made quite a splash in both the art and the AIDS worlds, not all of it pleasant. Co-curated by Jonathan David Katz, Director of the Visual Studies Doctoral Program at the University at Buffalo, The State University of New York, and Rock Hushka, Chief Curator and Curator of Contemporary and Northwest Art, Tacoma Art Museum, the show viewed from its most obvious angle is a retrospective look at American art related to AIDS from the start of the epidemic in the early 1980s right up until today. But as the exhibition catalogue essays by both curators make clear, it is also intended to support an underlying thesis: that art refracted through the AIDS crisis has altered the very manner in which contemporary artists engage in making their work and the manner in which that art is presented to the world. Quoting Jonathan David Katz directly: “In fact, I will be so bold as to argue that today’s art world is, at its core, a child of AIDS, and that forms of critical/theoretical framing and institutional display that are now taken for granted are informed more by AIDS than by any other single factor.”

Reviews of the show in publications as diverse as The New York Times, The Guardian, Burnaway, artsatl.com, and the Los Angeles Review of Books have been mostly positive, if somewhat mixed, including comments like “flawed but vital,” “a landmark exhibition,” “one of the most engaging exhibitions to come to Atlanta in years,” and “an exceptional exhibition.” One particularly notable criticism was by Holland Cotter in The New York Times, who faulted the show for a lack of focus, writing that it “is flawed by conflicted ideas of what it wants to be: a survey or a think piece.”

I can’t speak to the exhibition’s previous incarnations in Tacoma, Washington, or Kennesaw, Georgia, but based on what I saw at The Bronx Museum, I would lay blame for any failings of the show to articulate the ideas behind it on something much more mundane than muddled thinking on the part of the curators. Go to any major exhibition at the big league museums in cities like New York, Chicago, Los Angeles, Houston, Paris, London, or Madrid, and you will find extended explanations on the walls introducing visitors to the show’s thematic and historical issues, as well as audio guides aimed at providing much the same information. You will also often find explanatory wall captions accompanying each piece of art on display. But for Art AIDS America, at least as shown in the Bronx, there are only three informational sources available to viewers: (1) (for the most part) bare-bones captions listing each piece’s title, the name of the artist, the year it was created, and its provenance; (2) the show’s catalogue, where not just the curators but many other individuals who are definitely in the know about its subject matter more than competently link together the various threads of AIDS history, art-about-AIDS history, and twentieth-century art history that make up the show’s intellectual backbone; and (3) occasional text comments about the art incorporated into pieces (the Duane Michals photo The Father Prepares His Dead Son for Burial is a good example), even though such comments do not necessarily speak specifically to the exhibition’s underlying theme of the impact of AIDS on contemporary art practices. 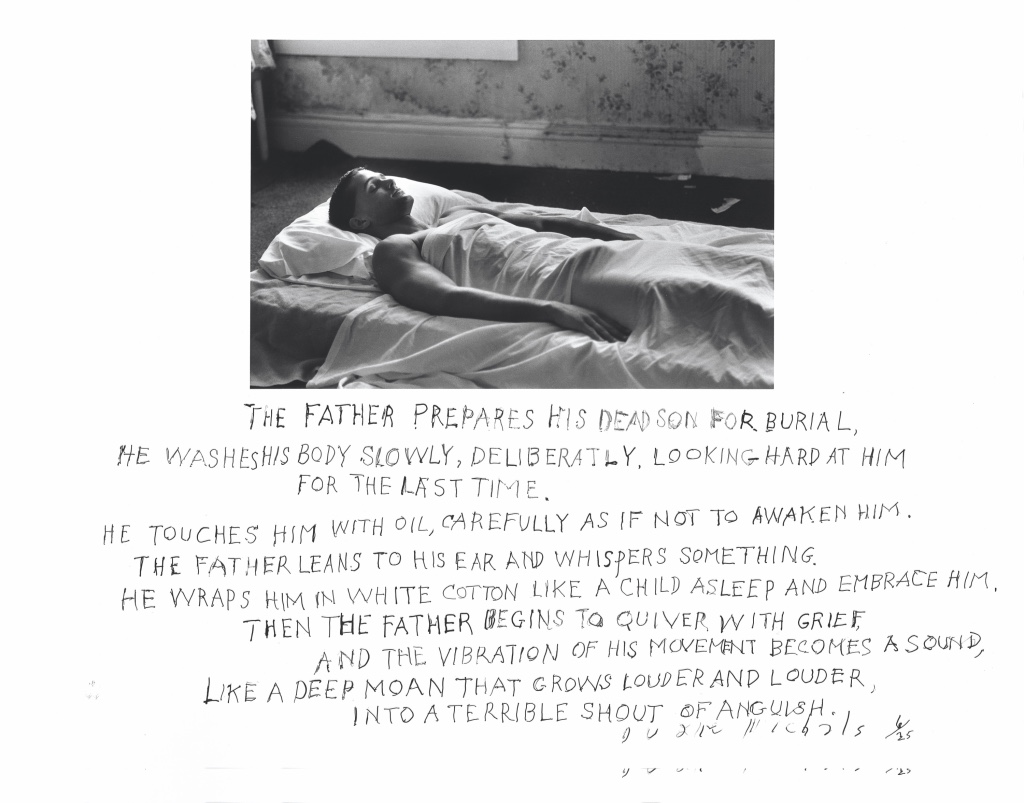 In other words, the culprit for anything muddled about the show seems to me to be a lack of funding for some of the intellectual infrastructure such complicated exhibitions require. Few casual museum-goers would be willing to spend $45 on the 287-page catalog to acquaint themselves with the ideas related to the show, and no one would be willing to carry such a heavy tome through the exhibition using it as a guide. Simpler, viewer-friendly, guideposts are required to help ensure a successful exhibition.

My own assessment of the show? As someone who’s read the catalogue essays, I found the underlying message about the art well argued and convincing. As someone who’s visited the exhibition, I found the infrastructure for conveying that message to viewers problematic and in need of development.

But note: These are not the only considerations related to this show. For another, quite different critique that all but upended the exhibition shortly after its opening in Tacoma and certainly took its curators and the Tacoma Art Museum by surprise, read my next blog entry, “Art + AIDS in Color.”

Note: The image shown with this post, The Father Prepares His Dead Son for Burial (© Duane Michals) is used with permission of DC Moore Gallery, New York, NY. The exhibition remains at the Bronx Museum of the Arts (www.bronxmuseum.org) through October 23, 2016, then moves on to its final venue at the Alphawood Gallery (www.alphawoodfoundation.org; info@artaidsamericachicago.org) in Chicago from December 1, 2016, through April 2, 2017.