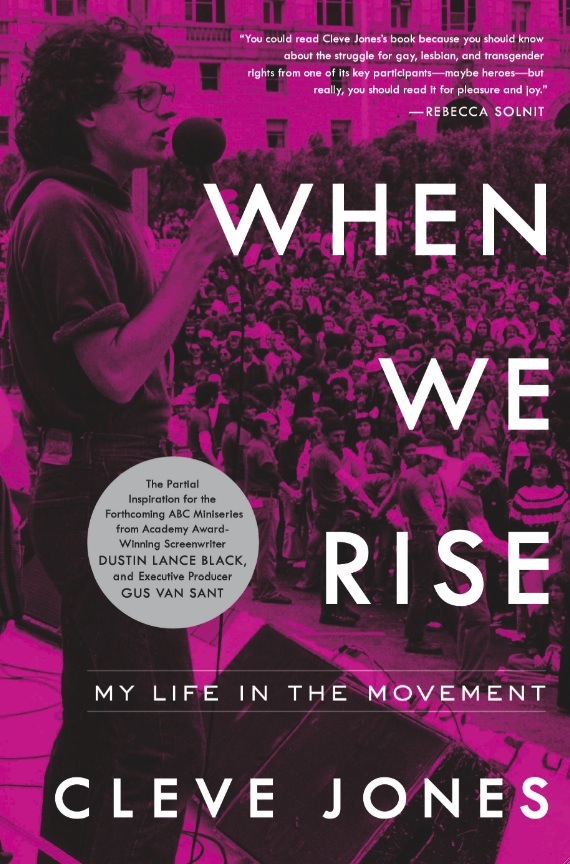 Cleve Jones’ recent memoir When We Rise: My Life in the Movement comes at an opportune moment. January 2017 has seen the installation of not merely a new regime in Washington, but a regime with a disturbing approach to dealing with many of the needs of the citizens it will be governing. It’s not just a new President who’s a bully by temperament and who seems to divide people into friends and enemies according to how they stroke his ego or not, but also a Congress the majority of whose members are clearly bent on destroying public education and the social safety net so laboriously constructed over the last few decades in this country and hostile to government spending for any purpose that doesn’t fit with an agenda that denies climate change, eliminates a woman’s right to choose, and sees supporting medical care and the arts as a waste of money. In other words, it could be goodbye to Social Security, Medicaid, Medicare as we have known it, the EPA, Roe v. Wade, and the National Endowment for the Arts and National Endowment for the Humanities, among other government programs designed to improve all our lives. Which means a goodly number of Americans may soon find themselves in the activist trenches, forced to re-fight battles everyone thought already won over the last fifty years or so.

Enter When We Rise, a moving history of Jones’ own long activist involvement with a variety of causes over the decades. Those causes ranged from the anti-Vietnam-war movement in the 1960s-1970s to the election of Harvey Milk as San Francisco’s first openly gay city supervisor in the mid-1970s to AIDS in the 1980s (and beyond) to the marriage equality fight of the 2000s to struggles over workers’ rights throughout his adult life.

For anyone involved in an activist cause, there are lessons to be learned here: how you go about it and how you can maintain the momentum over what may be many years, the kinds of problems you can expect to encounter, the rewards you can expect to see along the way. So let’s visit what Cleve Jones has to say about his own activist experiences.

After dropping out of college in Phoenix, where his family lived, Jones arrived to live in San Francisco in 1973. In the memoir he calls himself a “rocker kid,” and during his early years in the city he certainly danced, drank, drugged, and partied heavily in the gay sexual liberation lanes. He was also a street kid for a time since without a college degree he was qualified only for low-paying jobs.

However, in the San Francisco of the 1970s, Jones was also surrounded by an ongoing and vibrant culture of political protest. Even as the anti-war protests died down with the collapse of the Vietnam War in the mid-1970s, the city was a West Coast center of the nascent gay liberation movement. Harvey Milk was gearing up for his runs to be elected to the city’s Board of Supervisors, and political alliances were being forged between gay activists, labor activists, and democratic politicians.

It took a few years, but disposed to activism by his anti-war feelings and experience with a gay commune back in Phoenix, Jones eventually found himself participating in protests, especially when Anita Bryant ran her ugly but successful 1977 campaign to repeal a recently enacted gay rights ordinance in Dade County, Florida.

It was after the Bryant victory that Jones began to grow close to Harvey Milk. He describes Milk as his mentor, and working with his new friend he began to learn the methods and intricacies of activism: organizing and running marches and protests; putting up posters around a campus, a neighborhood, an entire city; speaking at rallies and to people individually door to door; forming alliances with groups whose focus might be different but where there were common aims; dealing with government officials and the police. After Milk was elected to the Board of Supervisors, he even hired Jones as an intern in his office.

Three notable issues where Jones worked with Milk (among others): a boycott of Coors beer in gay bars to support labor rights at the Coors brewery in Colorado (1977), Milk’s own election (1977), and defeat of the state-wide Briggs initiative, which would have barred lesbian and gay educators from teaching in California public schools (1978)—all successful. Add one other event he witnessed in 1978, not directly related to Harvey Milk, but presaging a very important development in his own life nearly a decade later: the creation of the rainbow flag by his friend Gilbert Baker, which quickly spread not just nationwide but worldwide as a symbol of the LGBTQ community.

Harvey Milk was assassinated in 1978, and so did not live to see the calamity that overtook the gay world a few years later and would define a central part of Cleve Jones’ activism for the rest of his life: the advent of AIDS. But that is a tale for an upcoming second blog entry on revisiting activism. For now, I want to point out that there are already lessons to be learned from Cleve Jones’ memoir. Stated succinctly, they are:

Part 2 of this blog will discuss Clive Jones’ involvement with AIDS activism and marriage equality. As we’ll see, the lessons to be learned there are quite different.

When We Rise is available as a hardback and paperback in bookstores nationwide, and also as a Nook or Kindle e-book.