Covid-19: the tragedy that defines our era, from the 76,500+ deaths it has caused so far (May 7, 2020), to the shelter-in-place guidelines across the world that have shut down the world economy, to the mishandled response by the federal government that has exposed the danger of finding yourself saddled with an incompetent malignant narcissist in charge of the crisis at the national level.

As an escape from all the dismal news on TV these days, and all the anxiety about the future course of the pandemic, my husband Dave and I have allowed ourselves one of the few respites open to people by taking one- to two-mile walks each day, in our case around our neighborhood of Morningside Heights on the Upper West Side of Manhattan, walks that have stimulated memories and feelings of what I love about this area where I’ve lived for the last forty-two years.

Here is a rundown of some of those memories and feelings:

∎  One of my first encounters with Morningside Heights occurred several years before I lived here myself. I moved from my hometown of Albuquerque, New Mexico, in September 1968 to pursue graduate studies in philosophy at the New School for Social Research in Manhattan’s Greenwich Village. In the early 1970s I took a seminar with Hannah Arendt titled “The History of the Will.” At the end of the semester, she invited the seminar members to  a party at her apartment. Of course I attended. All these years later I remember being at the party very clearly, in her quite large multi-room apartment, which was on Riverside Drive, overlooking Riverside Park, the Hudson River, and the Jersey shore across the river. What I couldn’t remember was the exact location or address of the building where she lived, although I thought it might have been on the north corner of West 109 Street, just a couple of blocks from where we now live. Last week Dave and I were walking north on Riverside Drive from West 96 Street, and when we reached West 109 Street I looked at the address of the building on the north corner, which read “370.” At home I typed “370 Riverside Drive, NYC” into my computer’s search engine, and was shocked to see a Wikipedia article immediately appear on-screen with Hannah Arendt as the first listed notable resident of the building. It seems not just Arendt, but the building itself has quite a distinguished history. 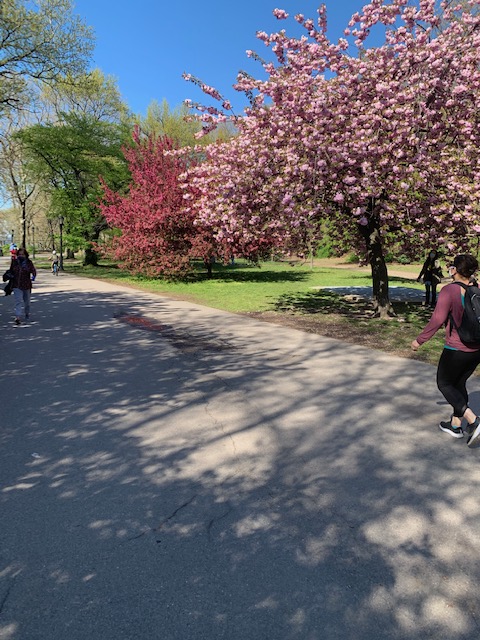 Sunny May afternoon in Riverside Park. (Photo by Dave Kampel, © 2020.)

∎ Another notable resident of the area: Alice Neel, a famed, if controversial, portrait painter, who lived at 300 West 107 Street on the Upper West Side of Manhattan from 1962 to her death in 1984. I lived in the neighborhood for the last six years of her life, and I certainly passed that building on occasion. Alas! I never met her. I didn’t even glimpse her on the streets. But I love her art.

∎ The building where Dave and I live had its own notable resident as well, at least for a few years after I moved here: a painter by the name of—improbable as it sounds—Rackstraw Downes. Born in England, educated there and in this country, he is known for his plein-air, realist style. I used to see him on the sidewalk occasionally, standing as he painted at his easel. He’s still alive, although no longer living in our building, and represented by the Betty Cuningham Gallery, located down on Rivington Street in Manhattan’s Lower East Side.

∎ One more famous person I know of who lives in my neighborhood: André Aciman, author of the  2007 novel Call Me by Your Name, which was made into the highly acclaimed movie of the same name in 2017. Aciman is the author of a number of books, both fiction and non-fiction, and in one of his non-fiction works titled Alibis: Essays on Elsewhere, there are several chapters involving New York City, where he and his wife live and raised their three children. It was while reading the chapter titled “Empty Rooms” that I suddenly realized he was describing the neighborhood where Dave and I live, writing about waiting at the corner of West 110 Street and Broadway for his eldest son’s school bus to arrive in the evening, visiting the nearby Starbucks, and walking along West 110 Street to go home. I love Call Me by Your Name, and have read nearly all of Aciman’s books. But will I ever meet him? For that matter, does he still live somewhere between Hannah Arendt’s apartment and mine? I hope the answer to both is yes. But as of yet the questions remain unanswered. 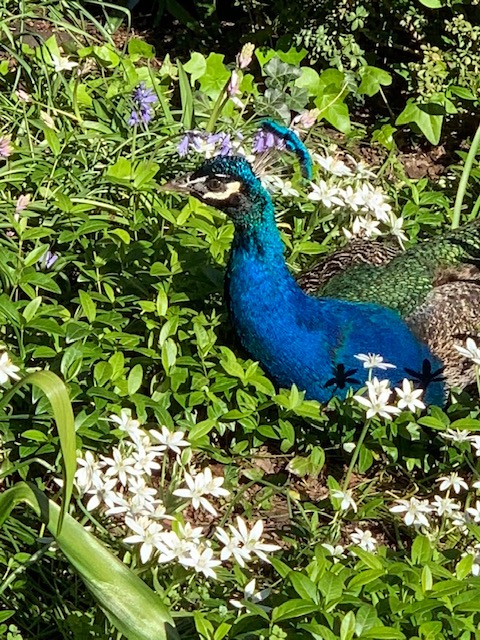 Peacock Harry or Jim resting in May sun at Cathedral of St, John the Divine’s Biblical Garden. (Photo by David Kampel, © 2020.)

∎ Moving on from people to places: The next stop is the Cathedral of St. John the Divine, which is the cathedral of the Episcopal Diocese of New York. The building is huge, magnificent, but like the medieval cathedrals in Europe a long-term work-in-progress. Around twenty-five years ago I watched another phase in its construction (an addition to the tower at the nave’s southwest corner), which came to an end when the funding for the project ran out. Inside, the cathedral contains memorials to firemen who lost their lives on the job and to those who have died of AIDS, fourteen themed bays that honor professions and human endeavors, gorgeous stained glass windows and hanging tapestries, and a Keith Haring tryptic cast in bronze and covered with white gold. Outside, it has a large Peace sculpture/fountain, a Biblical Garden, and walkways winding through a number of lawns. It also has three peacocks named Harry, Jim, and Phil that wander at will through the cathedral’s grounds. Phil is all white, so the image of the peacock that accompanies this blog entry is either Harry or Jim, sunning himself in the Biblical Garden. One last note on the cathedral: Every year in the fall it holds a Blessing of the Animals to honor St. Francis of Assisi, patron saint of animals and (in modern times) ecology. The cathedral has animals of all kinds brought in to be blessed, and neighborhood people often bring their pets. My first time there, I learned one thing I’d never realized: The animals are brought into the church for the blessing, so watch your step. They seem to regard the floor as their toilet.

∎ Another major institution near where we live is Columbia University. My college years were spent on the slopes of the Sangre de Cristo mountains of Santa Fe, New Mexico, and my elementary school in Albuquerque was two blocks from the main campus of the University of New Mexico. Both campuses were huge, and it took me some time to become used to the more compact main campus of Columbia. Nevertheless it has its own wonders: the colorful azaleas that bloom each spring, a bridge that spans Amsterdam Avenue between West 116 and 117 Streets with views extending for miles uptown and down and displaying a number of sculptures, including one by Henry Moore. For weeks around Christmas and New Years, lights cover the trees on the West 116 Street walkway through campus from Amsterdam Avenue to Broadway, providing a fairyland feel that virtually blocks out the sense of being in a major world metropolis with all its scurry and hurry. One of the really spectacular art shows I saw there was of Francisco Goya’s Caprichos series, all eighty of them. It was just me and maybe five other people wandering through the show. What an experience!

∎ Then there’s the Hungarian Pastry Shop, a neighborhood institution. On one of my visits back to Albuquerque I was visiting a friend when another friend of his stopped by. When the other friend found out where I lived, the first words out of his mouth were “Ah, the Hungarian Pastry Shop.” It seems he lived in New York for a short while, and frequented the place all the time. Sometimes I wonder if its fame has managed to spread to Europe as well. Its baked goods are certainly as tasty as any I’ve had anywhere, including Europe. 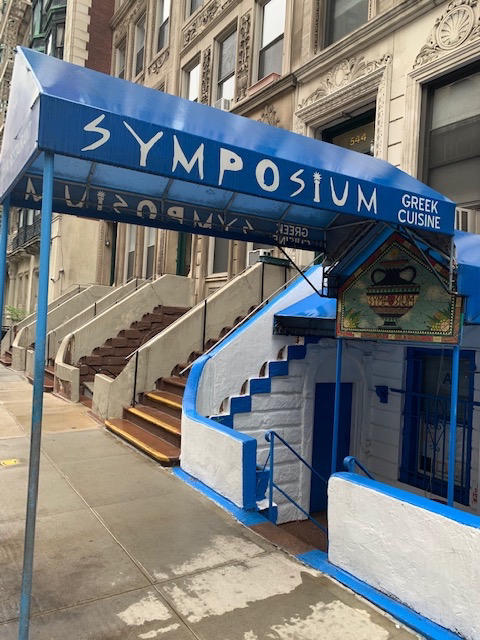 ∎ Finally—because this blog entry has to end somewhere—there’s Symposium restaurant, one block south of Columbia. Its traditional Greek food is excellent, and its enclosed back patio is where family and friends gathered in March 2014 for Dave’s and my marriage. We consider its owner, his family, and those who work there as part of our extended, chosen family. Feelings like that about businesses you deal with are what make Morningside Heights feel homey, a place where you feel relaxed and wanted, not just an area you point to on a map.

I once told someone I felt like the three sisters in Anton Chekhov’s play of the same name who lived a provincial life in Russia and were always longing for a life in Moscow. Well, I made it out of the provinces of the United States to one of its capital cities, and love the life I have here. The friend said, “But you would have made a life for yourself if you’d stayed in Albuquerque.” My reply: “I know. But it wouldn’t have been the life I’ve had here.” I’ve tried to share some of the reasons for that feeling in this blog entry.